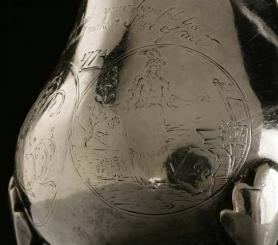 Explore family life in the American Revolution, debate the legacy of Benedict Arnold and more with these activities on the War of Independence. 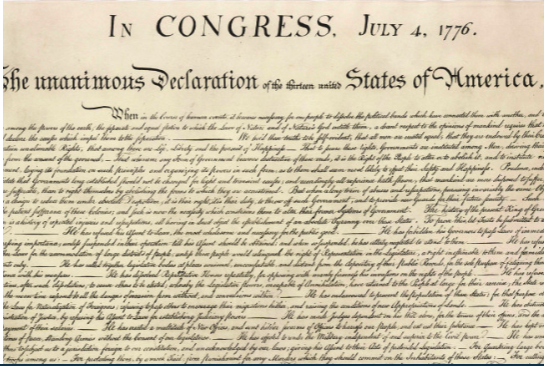 This historical investigation is aligned with the C3 Framework and is from C3teachers.org. 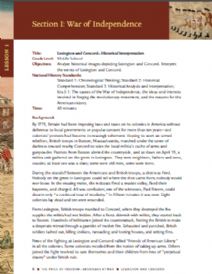 Engage middle school students in historical document analysis with three contrasting images of the Battles of Lexington and Concord.  Using a graphic organizer, students will examine three primary sources and analyze the different perspectives presented in each. After completing the analysis, students will display their interpretations of the "true" story in their own illustrations. This lesson plan includes background information, full-color images of primary sources, and a student worksheet.

This lesson plan was produced to accompany the exhibition The Price of Freedom: Americans at War, by the Smithsonian's National Museum of American History. 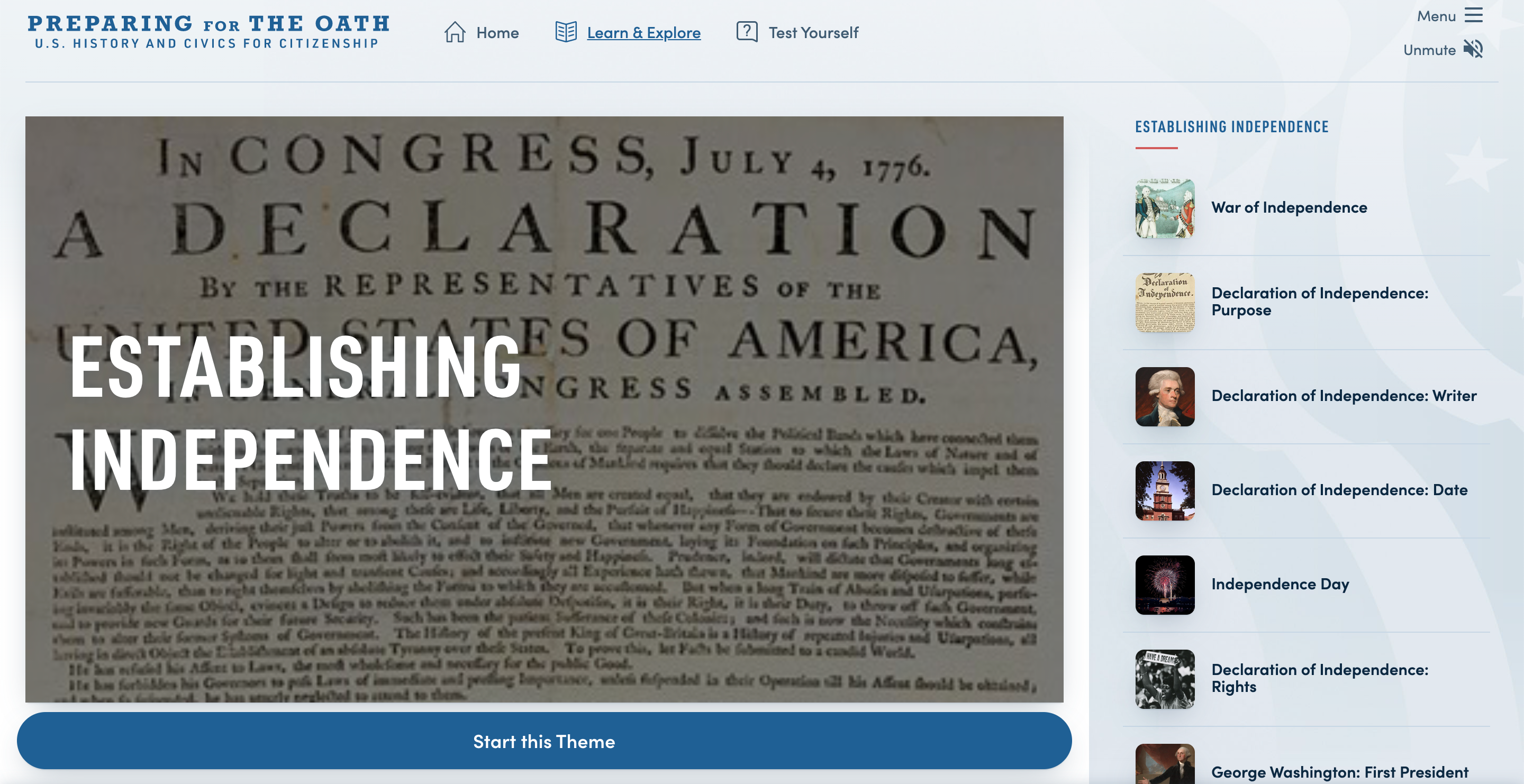 Preparing for the Oath: Establishing Independence

Learn more about America’s transition from colony to country through short videos, mini-activities, and practice questions in this segment of Preparing for the Oath: U.S. History and Civics for Citizenship. The eight questions included in this segment cover topics such as the Declaration of Independence, the War of Independence, and George Washington.

The Smithsonian’s National Museum of American History recently acquired at auction a rare 18th-century silver milk pot or creamer with engraved with symbols and an inscription that support the American colonists’ ongoing boycott of imported goods, especially tea, during the months following a 1773 Tea Act aimed at expanding the British East India Company’s monopoly. Domestic objects from this era that reflect political or economic sentiments are rare.

Decorated with the female figure of a Native American holding a tea plant, topped by a liberty cap with a crate of tea and a British ship by her side, the milk pot has an inscription that reads, “Britons take back your baneful tea/You n’er make a slave of me” which refers to many colonists’ pledge to end the consumption of taxed tea. 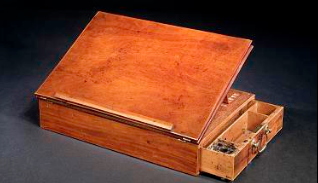 In 1776 Thomas Jefferson wrote the Declaration of Independence on this portable desk of his own design. It features a hinged writing board and a locking drawer for papers, pens, and inkwell.

By the summer of 1776 members of the Second Continental Congress prepared to declare their independence from Great Britain. They assigned the task of drafting the declaration to Thomas Jefferson, a delegate from Virginia. Jefferson would later write that rather than aiming for originality, "it was intended to be an expression of the American mind." On July 4, 1776 the Continental Congress amended and adopted the declaration. Its words not only established the guiding principles for the new nation, it has served to inspire future generations in America and around the world.

The desk continued to be Jefferson's companion throughout his life as a revolutionary patriot, American diplomat, and president of the United States. While the drafts of the Declaration of Independence were among the first documents Jefferson penned on this desk, the note he attached under the writing board in 1825 was among the last: "Politics as well as Religion has its superstitions. These, gaining strength with time, may, one day, give imaginary value to this relic, for its great association with the birth of the Great Charter of our Independence."

On November 14, 1825, Thomas Jefferson wrote to his granddaughter Eleanora Randolph Coolidge to inform her that he was sending his "writing box" as a wedding present. Jefferson's original gift of an inlaid desk had been lost at sea and his portable writing desk was intended as a replacement. The desk remained in the Coolidge family until April 1880, when the family donated it to the U.S. government.
In his letter, Jefferson wrote: "Mr. Coolidge must do me the favor of accepting this [gift]. Its imaginary value will increase with years, and if he lives to my age, or another half-century, he may see it carried in the procession of our nation's birthday, as the relics of the Saints are in those of the Church."

The Dodge Family and Chance: Seeking Freedom in the Revolutionary War

Students can learn about the Dodges, Chance and life at the time of the American Revolution by investigating a room from their house, a will from 1786, and artifacts from the period. By the 1770s, Abraham and Bethiah Dodge and many other Americans were willing to risk everything for independence, and African Americans such as Chance, their slave; asked white patriots to live up to their ideas about liberty. The Dodges and Chance are one group of people that lived in the Ipswich, Massachusetts house which is the focus of Within These Walls, an online exhibition.

The Time Trial of Benedict Arnold

In this lesson, students will examine the difference between history and memory by debating the legacy of Benedict Arnold.  Using video clips of an actor playing Arnold, students are invited to debate his actions and determine how history should remember him. 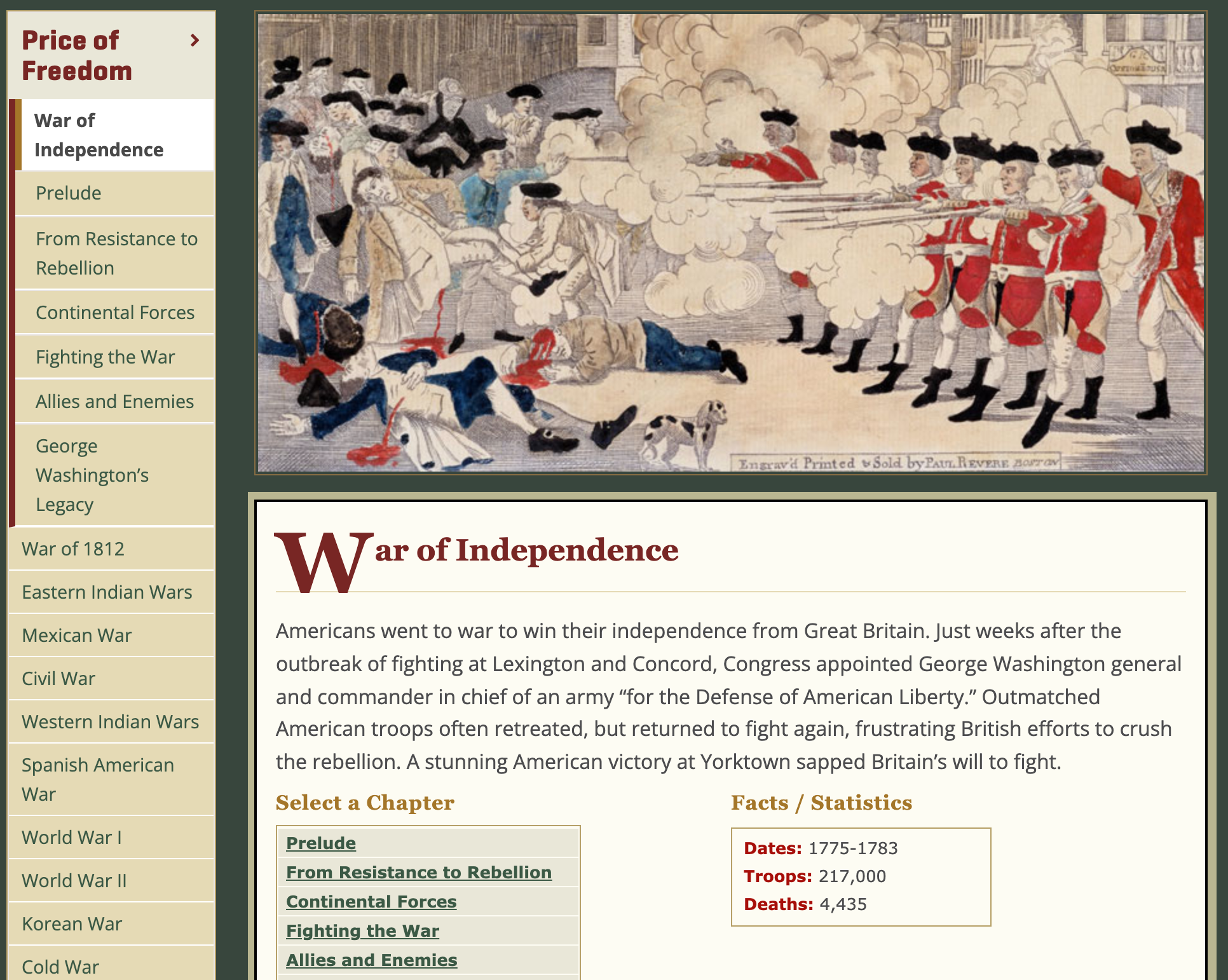 Americans went to war to win their independence from Great Britain. Through the use of images and objects from the Museum's collections, students will learn about the involvement of colonial militias during the French and Indian War, the causes of the Revolution, life in the Continental Army, the major battles of the War of Independence, the participants on both sides of the conflict and the legacy of General George Washington. This website is part of the online exhibition The Price of Freedom: Americans at War. A non-flash version of the site is availalbe: The War of Independence. 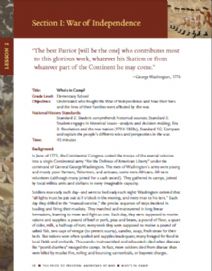 Use artifacts and historical literature to bring the War of Independence to life for elementary students.  By playing the "Who's in camp?" card game, students develop a deeper understanding of the many civilian and military roles that supported the War of Independence, then use their knowledge for a role-playing writing assignment. This lesson plan, which includes background information and printable artifact cards, was produced to accompany the exhibition The Price of Freedom: Americans at War, by the Smithsonian's National Museum of American History.