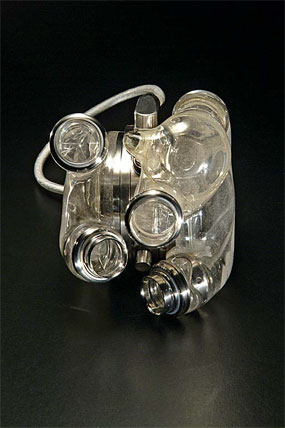 AbioCor Total Artificial Heart is the first electro-hydraulic heart implanted in a human. Approved by the United States Food and Drug Administration for clinical trails, the AbioCor was implanted in Robert Tools by cardiac surgeons Laman Gray and Robert Dowling on July 2, 2001, at Jewish Hospital in Louisville, Kentucky. The historic operation marked the first time an artificial was used as a permanent replacement for a human heart since the air-powered Jarvik-7 artificial heart was implanted more than fifteen years before.

The AbioCor is a two-chamber pump designed to perform like a natural human heart. It is powered by batteries, and pumps more than 2.5 gallons of blood a minute to the lungs and then to the rest of the body.

Tools, who suffered from irreversible congestive heart failure, chose to have his diseased heart removed and replaced with the plastic and titanium pump. He lived for five months, well beyond the clinical trial's goal of sixty days.

The development of the AbioCor involved a team of engineers, scientists, and physicians from across the United States. Completely contained within the body, no tubes protrude through the skin, nor is the patient tethered to a noisy bedside console, as with air-powered hearts. Instead the heart is powered by rechargeable batteries and microcomputer technology that regulates the heartbeat according to the patient's activities.

2: The search for community, stability, and peace in an interdependent world