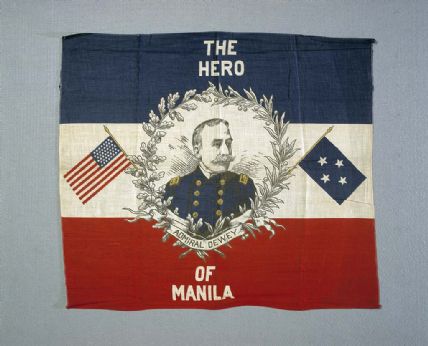 Blue, white, and red banner with an image of Admiral Dewey in center of white stripe, surrounded by laurels. “Admiral Dewey” in banner among the laurels, American flag, and a navy fleet admiral’s flag. “The Hero” in top blue stripe. “Of Manila” in bottom red stripe.

Admiral George Dewey commanded the U.S. Navy’s Asiatic Squadron based in Hong Kong in 1898 when the United States declared war on Spain. Ordered to sail to Manila and capture or destroy the Spanish fleet there, he engaged the Spanish in Manila Bay on the morning of May 1 and completely destroyed it by noon, without a single loss of American life. The Battle of Manila Bay was one of two major American naval victories in the Spanish-American War. The complete rout ended any threat from the Spanish naval forces. All major Spanish ships were destroyed or captured, without any significant damage to American forces. The battle is perhaps best known as the occasion when Dewey uttered one of the most famous statements in American naval history: “You may fire when you are ready, Gridley.” Captain Charles Gridley was the commander of the USS Olympia.