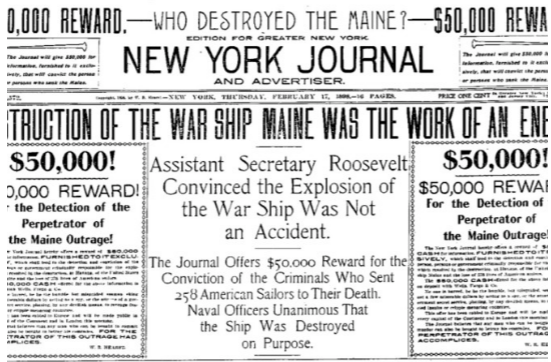 This historical investigation is aligned with the C3 Framework and is from C3teachers.org.

This inquiry is focused on the compelling question “Was American expansion abroad justified?” In other words, did the expansion of America’s global power justify the means by which lands came under control of the United States? The inquiry calls into question motives and outcomes of imperialism by considering both the positive and negative results of United States expansion abroad. Students will focus on the Age of Imperialism near the turn of the 20th century. The focus of the inquiry is the United States’ involvement in the Spanish-American War. In answering Supporting Question 1, students learn about economic, political, and social conditions in the United States in the latter half of the 19th century that promoted American expansion. As the inquiry continues with Supporting Questions 2 and 3, students explore arguments for and against imperialism with a specific focus on United States involvement in the Spanish-American War. They also explore the role of the media in America’s move toward war and the impact of military involvement in Cuba in 1898. Supporting Question 4 focuses on the results of the Spanish-American War.

1: How Progressives and others addressed problems of industrial capitalism, urbanization, and political corruption

3A: Compare and contrast differing sets of ideas.

3I: Evaluate major debates among historians.

CCSS.ELA-Literacy.RH.6-8.2 (Key Ideas and Details): Determine the central ideas or information of a primary or secondary source; provide an accurate summary of the source distinct from prior knowledge or opinions.

CCSS.ELA-Literacy.RH.6-8.6 (Craft and Structure): Identify aspects of a text that reveal an author's point of view or purpose (e.g., loaded language, inclusion or avoidance of particular facts).

CCSS.ELA-Literacy.RH.6-8.7 (Integration of Knowledge and Ideas): Integrate visual information (e.g., in charts, graphs, photographs, videos, or maps) with other information in print and digital texts.

D2.Geo.1.6-8. (Geography): Construct maps to represent and explain the spatial patterns of cultural and environmental characteristics.

D2.His.2.6-8. (History): Classify series of historical events and developments as examples of change and/or continuity.

D3.1.6-8. (Gathering and Evaluating Sources): Gather relevant information from multiple sources while using the origin, authority, structure, context, and corroborative value of the sources to guide the selection.

D3.4.6-8. (Developing Claims and Using Evidence): Develop claims and counterclaims while pointing out the strengths and limitations of both.