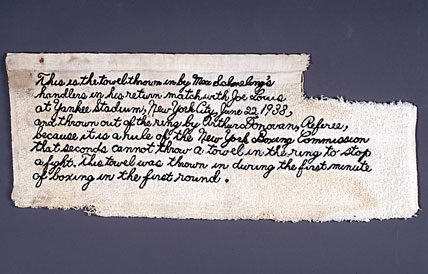 Heavyweight boxing champion Joe Louis (1914-1981) lost his first bout with Nazi Germany's champion Max Schmeling in 1936, but the return match was a triumph for America. This towel was thrown in by Schmeling's handlers at Yankee Stadium, New York City, June 22, 1938, where Louis pummeled his opponent in the first round. Enforcing a boxing rule that seconds cannot stop a fight, referee Arthur Donovan then threw it out. The towel was thrown in again during the first round, giving Louis the victory in two minutes and four seconds. The story of the fight was later embroidered on the towel.

1: The causes of the Great Depression and how it affected American society

2: How the New Deal addressed the Great Depression, transformed American federalism, and initiated the welfare state