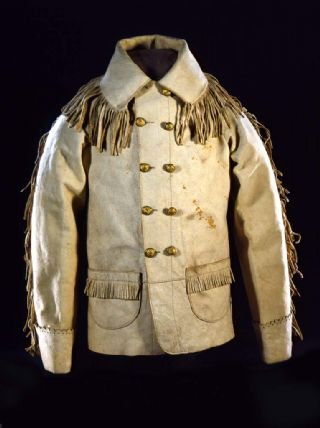 This buckskin coat was worn by Custer when he was Lieutenant Colonel with the 7th U. S. Cavalry in the Dakotas. It was one of several owned and worn by Custer, who prefered to dress like a frontiersman while out West.

In 1912, Custer's widow, Elizabeth, donated this buckskin coat to the Smithsonian as a tribute to her husband.

George Armstrong Custer was born in 1839 in New Rumley, Ohio; by 1857, he was enrolled as a cadet in the U.S. Military Academy at West Point upon appointment by a congressman. He graduated last in his class of 34 students. During the Civil War, he became known for his fearlessness (some would say recklessness) in battle; indeed, he was promoted to the rank of Major General by the age of 25. He figured prominently in Sheridan's campaign in the Shenandoah Valley in 1864; at the surrender at Appomattox in April 1865, General Sheridan gifted Custer's wife, Elizabeth, with the table on which the surrender was signed.

After the war, George Custer reverted to the rank of Captain. He was given command of the newly formed 7th Cavalry in 1866 and elevated to the rank of Lieutenant Colonel. While in command of the 7th Cavalry, he gained the reputation as an Indian fighter who often ignored orders if they did not suit his sense of self-aggrandizement. His recklessness finally caught up to him on June 25, 1876, when he and his five companies of U.S. Cavalry were annihilated by a combined force of thousands of Sioux and Cheyenne warriors at Little Big Horn, Montana.

In 1864, George Custer married Elizabeth (known as Libby) Bacon. Theirs was a marriage of love and devotion; Libby followed her husband on campaign during the Civil War, and even went with him to the frontier. After his death, Libby crusaded to perpetuate the image of her husband as a gallant soldier; to this end, she undertook speaking engagements and wrote several books.

In 1912, she donated this coat to the Smithsonian in memory of her husband. 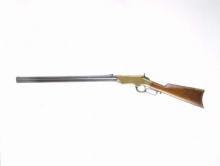 The Henry rifle was the immediate forerunner of the famous Winchester rifles.