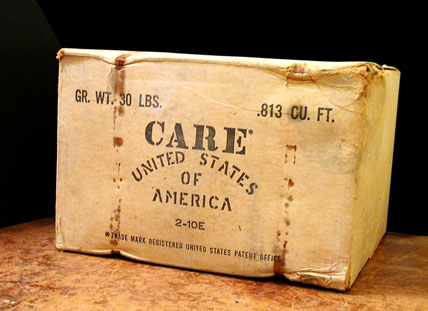 This cardboard CARE package, contains seven smaller boxes and bags of macaroni, cornmeal, Carnation instant chocolate flavored drink mix, and nonfat dried milk. It has a paper insert reading "August 6, 1962. Greetings from the men of the U.S.S. Lake Champlain." The macaroni boxes are marked "Packed for CARE USA by A.Zerega's Sons, Inc." CARE is the acronym for "Cooperative for American Remittances to Europe." CARE Package is the registered trademark of the Cooperative for Assistance and Relief Everywhere, Inc. It began its emergency food relief at the end of World War II.

Originally, CARE packages contained surplus foodstuffs from the military, but after the Army rations ran out in early 1947, CARE assembled its own packages, typically containing several tinned meats, eight ounces of powdered eggs, a pound each of lard, apricot preserves, honey, and raisins, and two pounds each of margarine, sugar, powdered milk, and coffee. Food companies made donations of their products, but CARE bought most of these supplies and paid for their shipment. Individuals placed orders by mailing a $15 "remittance" (a check or money order) to CARE's headquarters in New York.

Packages were assembled in Philadelphia, shipped overseas, and delivered locally by any means of conveyance. When a recipient received the gift, a signed receipt was returned to the sender within 120 days. As the famine threat subsided, CARE packages included books, blankets, tools, and knitting supplies. CARE even managed to send x-ray machines and iron lungs from its larger donors. The food package program ended in 1967, as CARE switched to other means of shipping commodities, though it renewed the classic CARE Package occasionally, most recently in the former Soviet republics and in Bosnia.

1: The economic boom and social transformation of postwar United States

2: How the Cold War and conflicts in Korea and Vietnam influenced domestic and international politics

4: The struggle for racial and gender equality and the extension of civil liberties