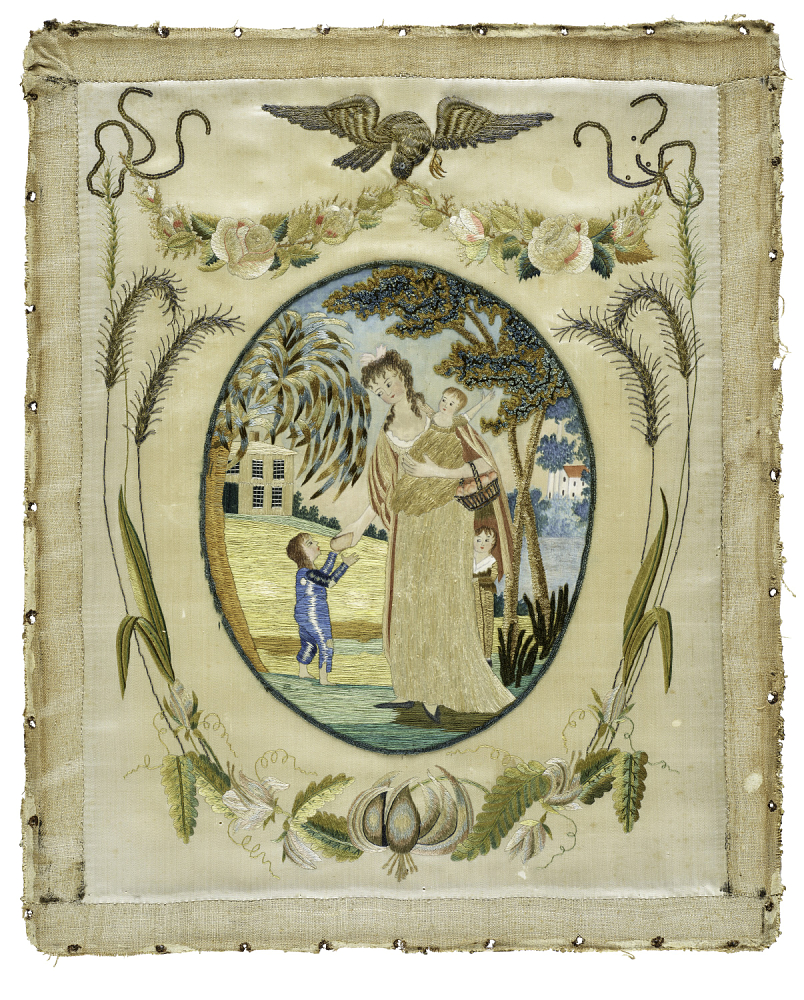 After a young lady learned to embroider a sampler, she might attend a female academy to make a silk embroidered picture. This was a more challenging technique that became popular in the early 1800s. Subjects included classical, biblical, and historical scenes, as well as mourning pictures.

In an oval with couched chenille outline, a woman is followed by a child. She carries an infant and a basket of bread, and she is giving bread to a barefoot boy in patched clothing. Framing the oval are wheat-heads, stems, leaves, lilies, and a garland of roses with bow-knots held by a raised ¬work eagle with spread wings. It is worked on an ivory silk ground. The stitches used are satin, long and short, outline, French knot, seed, and couching. The threads are silk, chenille, and metal.

The source of the design is "Charity," an image engraved by C. Stampa in London, 1802. Charity is one of the three theological virtues and is often represented as a female figure. The eagle was a national emblem of victory through the blessings of God, and is often found on other embroideries done at the Misses Patten’s school in Hartford, Connecticut. Misses Sarah, Ruth, and Mary Patten, along with their mother Ruth Wheelock Patten, operated a very successful girls’ school in Hartford, Connecticut from about 1785 to 1825.

Rachel Breck was born on July 22, 1792, to Joseph and Abigail Kingsley Breck of Northampton, Massachusetts. She married George Hooker on June 20, 1819, and they had eight children. Rachel died January 6, 1879, in Long Meadow, Massachusetts. She attended Deerfield Academy in 1806, but embroidered “Charity” at the Misses Patten’s school in Hartford, Connecticut. See her sampler.