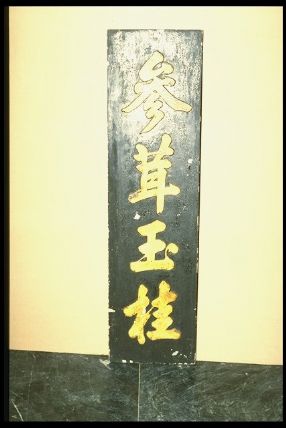 This sign was purchased by a North Beach second-hand shop from a proprietor in the neighboring Chinatown district of San Francisco. It is said to date from between 1890 and 1910. If that is so, the sign’s survival is quite miraculous: The 1906 earthquake in April of that year caused much damage throughout the city due to spreading wildfires. Residents of Chinatown grabbed what they could easily carry and evacuated the neighborhood ahead of the fires, taking up temporary residence in relief camps in San Francisco and Oakland. Relocating Chinatown permanently to Hunter’s Point or North Beach was discussed, but, with realization of the continued need for the tax base provided by foreign trade between the business community and Asia, Chinatown was ultimately rebuilt at its original location and continued to be not only a major center for the Chinese American community but a popular destination for tourists to the present day.

Translation of this shop sign would help to document a portion of the economic history of this neighborhood. It is likely that the language is Cantonese, the dialect used in Southern China, which was engaged in foreign trade long before military oppression and American labor recruitment in the mid-19th century brought immigrants to “Gun San” or the “Land of the Golden Mountain,” as the Cantonese referred to the West Coast of the United States. Not only did Chinese pan for gold in San Francisco. They labored excavating coal, mercury, and borax, building railway lines and tunnels, and working for fisheries and canneries throughout Far West. Economic depression in the late 1800s brought fear, discrimination, and violence to established Chinese communities. Successively restrictive acts of Congress prohibited further Chinese immigration beginning in 1882, with continuing restrictions of civil rights until the Immigration Law of 1965 eliminated such restrictions, bringing a new wave of migration to the United States from Asia.

With dwindling opportunities to earn enough money to return home, Chinese Americans turned to such service industries as laundries and restaurants and specialized increasingly in trade abroad. But this sign also may have advertised availability of herbal medicines, foodstuffs, cookwares, or furnishings desired by the local Chinese American community, which, while changing in population, has survived in San Francisco to the present day.

5A: Identify problems and dilemmas in the past.

5B: Analyze the interests and values of the various people involved.

5C: Identify causes of the problem or dilemma.

5E: Formulate a position or course of action on an issue.

5G: Evaluate the consequences of a decision.

1: How Progressives and others addressed problems of industrial capitalism, urbanization, and political corruption

3: How the United States changed from the end of World War I to the eve of the Great Depression 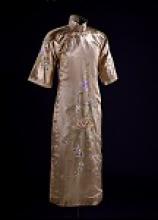