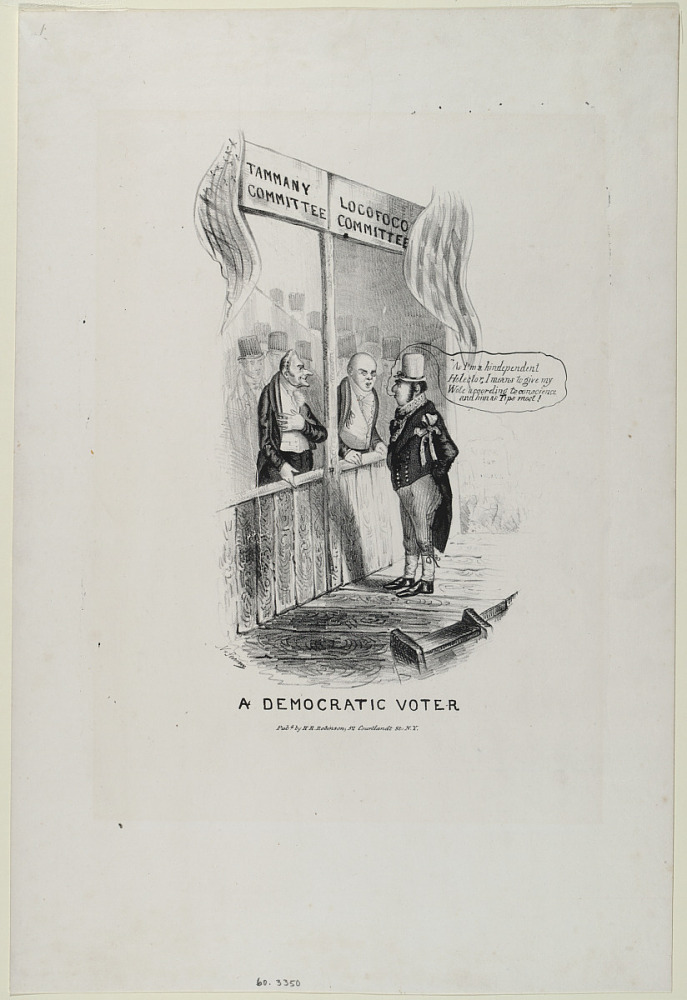 This undated black and white print depicts an Irish immigrant wearing a large campaign ribbon, tails, and striped breeches standing in front of two adjacent, flag draped campaign booths. One booth is occupied by a member of the “Loco Foco Committee,” and the other by a member of the “Tammany Committee.” While both aligned with the Democratic Party, the “Loco Foco Committee” was formed by dissatisfied members of the “Tammany Committee,” and was therefore at odds with them. While at odds with each other, they both shared an interest in securing the Irish vote. In 1817 after much protest, Irish immigrants were allowed to become members of the “Tammany Committee,” and quickly became members of the large political machine operated by the committee. Irish votes were bought through gifts of food, coal, and other necessary supplies by Tammany political bosses, and were relied upon to secure Democratic victories in both the city of New York and nationally. The 1835, “Loco Foco” was split from “Tammany” and that presented a problem to the immigrant voter, because they were two faces of the same party. The immigrant voter identifies himself as “a hindependent helector, I means to gove my Wote according to conscious and him as Tips most!” showing the Democratic Party as corrupt and subject to bribery. This print is by Henry R. Robinson, a Whig artist, so it most likely functioned as a means of discrediting the Democratic Party prior to the election of 1836.