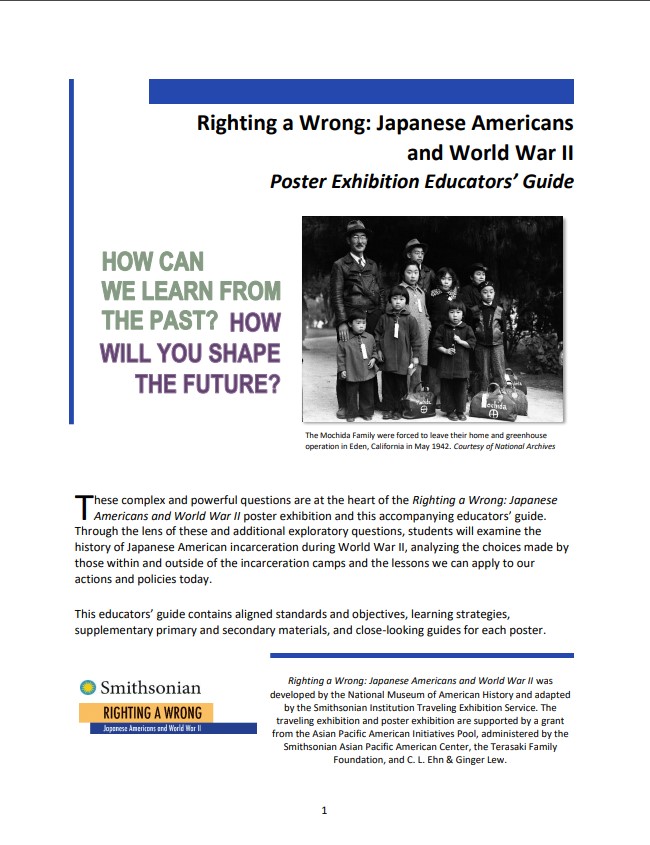 February 2017 marked the 75th anniversary of Executive Order 9066, a document that President Roosevelt signed in 1942, two months after Japan’s attack on Pearl Harbor. The order resulted in the imprisonment of 75,000 Americans of Japanese ancestry and 45,000 Japanese nationals in prison camps across the country, many being relocated far from home. Some 40 years later, the U.S. Congress formally recognized that the rights of the Japanese American community had been violated and President Reagan signed the Civil Liberties Act of 1988, providing an apology and restitution to the living Japanese Americans who were incarcerated during World War II.

This free resource includes eight posters and an educators' guide, that can be used to spark an inquiry-based activity in your classroom. To receive the posters, submit a request through the Smithsonian Institution's Traveling Exhibition Service.

The exhibition explores this history through the Executive Order 9066 document on loan from the National Archives; original artwork by Roger Shimomura, who spent several years in the Minidoka Camp in Idaho; historic images; and objects.

3A: Compare and contrast differing sets of ideas.

3D: Draw comparisons across eras and regions in order to define enduring issues.

5A: Identify problems and dilemmas in the past.

5F: Evaluate the implementation of a decision.

CCSS.ELA-Literacy.CCRA.W.7 (Research to Build and Present Knowledge): Conduct short as well as more sustained research projects based on focused questions, demonstrating understanding of the subject under investigation.

CCSS.ELA-Literacy.CCRA.SL.4 (Presentation of Knowledge and Ideas): Present information, findings, and supporting evidence such that listeners can follow the line of reasoning and the organization, development, and style are appropriate to task, purpose, and audience.

D2.His.1.9-12. (History): Evaluate how historical events and developments were shaped by unique circumstances of time and place as well as broader historical contexts.

D2.His.14.9-12. (History): Analyze multiple and complex causes and effects of events in the past.

D2.His.16.9-12. (History): Integrate evidence from multiple relevant historical sources and interpretations into a reasoned argument about the past.