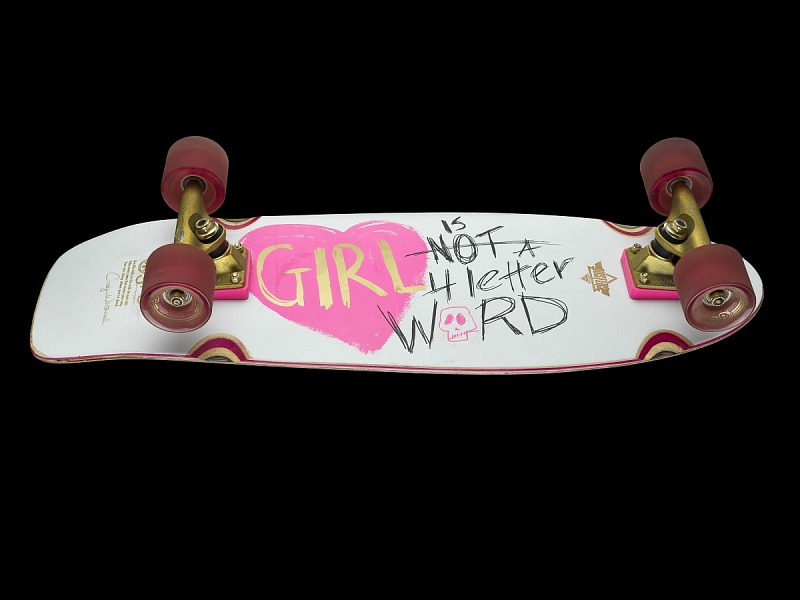 A skateboarding pioneer, Cindy Whitehead turned pro at seventeen, skating both pool and half-pipe and becoming one of the top-ranked vert skaters while competing against the boys. But Whitehead had no choice but to wear boys’ shorts when competing; there were no skate products for girls in the 1970s. She changed that in 2013 with her girl-empowered brand Girl is NOT a 4 Letter Word (GN4LW). This skateboard, adorned with Whitehead’s artwork, was the brand’s first product; equipment and apparel came next. She designed this helmet for safety, comfort, and style and manufactured it through a female-owned company.

Prototype skateboard designed by professional skater Cindy Whitehead and manufactured by Dwindle Distribution. Whitehead used her skate background to create the “Girl Is Not A 4 Letter Word” brand which includes Cindy’s original art work. Whitehead began skateboarding at age 15 and had turned pro by the time she was 17, something girls were not doing in the mid-1970s. She became one of the only girls skating both pool and half pipe and is the only girl ever to be featured in a two page article with a centerfold in a skateboarding magazine. Whitehead retired from skateboarding at 22 but still skates and has remained in the sports arena as a sport stylist, a job title she also created. Whitehead is especially supportive of young female skaters through her “Girl Is Not A 4 Letter Word” skate team and her products which are geared towards women and girls. Whitehead’s signature phrase printed in gold on many of the “Girl Is Not A 4 Letter Word” products personifies her independent spirit, "Live life balls to the wall. Do epic shit. Take every dare that comes your way. You can sleep when you’re dead."