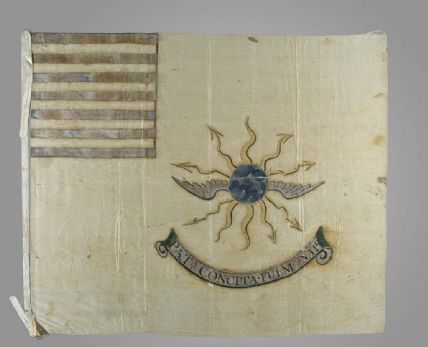 This guidon was referenced in the Memoir of Colonel Benjamin Tallmadgepublished by the Society of the Sons of the Revolution in the State of New York in 1904. This "pink" standard was known to be in the possession of Mr. F. E. Harper of New York City (reference from Gherardi Davis,Regimental Colors in the War of the Revolution [1907]).

The guidon was later referenced in American and French Flags of the Revolution 1775-1783, by F. E. Shermerhorn (1948) as having been owned by Senator Morgan G. Bulkeley, but "in some curious fashion, never explained, this flag disappeared and its whereabouts is not known...."

General History
The Second Regiment of Continental Light Dragoons, also known as Tallmadge's Dragoons, was named for Major Benjamin Tallmadge. Commissioned on June 20, 1776, he was eventually promoted to the rank of colonel, and became the chief intelligence officer for George Washington.

He organized the "Culper" spy ring on Long Island and in New York City in 1778 when asked by General George Washington. The city was then occupied by a strong British force under the command of General Sir Henry Clinton. Members of the Culper network also kept Clinton's headquarters under constant surveillance and were able to report to Tallmadge any loyalists posing as patriots who visited the British commander. In 1780, the network's information saved a French army marching to Washington's aid.

Physical Description
Pink silk with oil paint. The canton consists of seven silver and six pink stripes. The center of the guidon is a painted badge of a winged and fulminating thundercloud with ten gold-colored thunderbolts emanating like rays of the sun. Under the badge is a silver scroll with the motto "PATa CONCITa FULMnt NATI"; a rough translation is: "The fatherland/country calls/expects its sons to respond with/in tones of thunder."

2: The impact of the American Revolution on politics, economy, and society

3: The institutions and practices of government created during the Revolution and how they were revised between 1787 and 1815 to create the foundation of the American political system based on the U.S. Constitution and the Bill of Rights

1: How the transoceanic interlinking of all major regions of the world from 1450-1600 led to global transformations

2: How European society experienced political, economic, and cultural transformations in an age of global intercommunication, 1450-1750

3: How large territorial empires dominated much of Eurasia between the 16th and 18th centuries

4: Economic, political, and cultural interrelations among peoples of Africa, Europe, and the Americas, 1500-1750

5: Transformations in Asian societies in the era of European expansion 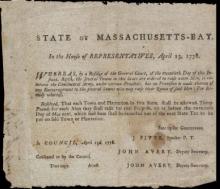 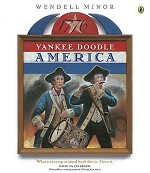 Beginning with the Stamp Act that angered the patriots, readers meet George Washington, Thomas Jefferson, and other historical figures, and learn about the documents and battles that kept the fight for freedom alive. Each striking illustration introduces readers to the people, places, and events that gave birth to our nation.