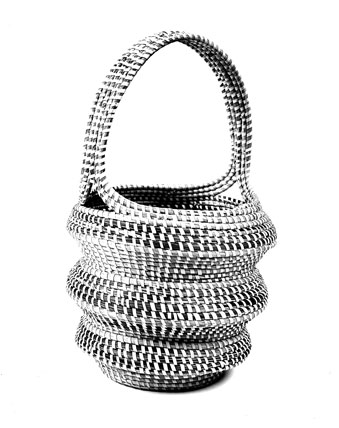 The process of manufacturing such baskets is called "sewing," but it is actually a process of binding and coiling long strands of grass. In the wetlands, two kinds of grasses are used; "sweetgrass," and more recently, black rush, also known as "bullrush." Strips of oak wood, or palmetto fronds are used to bind together long bundles of grass, which are then coiled into a particular shape. Makeshift tools, such as broken-off spoons, flattened nails, or cow ribs are used for the coiling and binding process. Sometimes, colored grasses or pine needles are used in the show baskets, although the use of sweetgrass, bulrush, and palmetto is standard.

Today, the role of the men and boys is to gather the materials, the women do the weaving and market the baskets. Until recently, baskets were sold from family-operated roadside stands, but increasingly, they are sold at county fairs and cultural festivals. Many of the older women regarded basketmaking as a carefully guarded community secret, but many of the younger women give basketmaking seminars to people from outside of the communities. The women of an earlier generation were not always comfortable with the term "gullah", younger women tend to recognize its historical and cultural value.

Today, the baskets are for domestic and decorative purposes, rather than agricultural use, and there is a much wider variety of shapes than when baskets were used on the plantations. Some coil weaving produces wall decorations, ladies' hats, and men's caps. Although there are no fixed rules for terminology, certain shapes are often given specific names. Some of the named shapes are for placing utensils inside the baskets.

2: How the industrial revolution, increasing immigration, the rapid expansion of slavery, and the westward movement changed the lives of Americans and led toward regional tensions

4: The sources and character of cultural, religious, and social reform movements in the antebellum period

1: The causes of the Civil War

2: The course and character of the Civil War and its effects on the American people

1: How the rise of corporations, heavy industry, and mechanized farming transformed the American people

3: The rise of the American labor movement and how political issues reflected social and economic changes

4: Economic, political, and cultural interrelations among peoples of Africa, Europe, and the Americas, 1500-1750

This 40-saw cotton gin and the wooden gearing came from a farm formerly owned by the Augustus C.

The story of a group of slaves' escape on the underground railroad by following directions from the song "follow the drinking gourd."