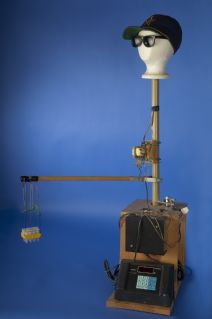 This robot was constructed in 1987 by Dr. Kenneth Kinzler and his colleagues at the Johns Hopkins Oncology Center's Molecular Genetics Lab run by Dr. Bert Vogelstein. It was used to conduct PCR in research on the p53 gene, which is linked to 50 percent of human cancers. Polymerase chain reaction, or PCR, is a chemical reaction that can create a huge number of copies of sections of DNA from a very small sample.

Kinzler and his fellow researchers started using PCR immediately after the technique was published in Science in 1985. The technique revolutionized their ability to do research, but it was time-consuming, requiring continuous, repeated changes in temperature. (For this reason, PCR is also known as thermal cycling.) Automated commercial PCR machines were not available until 1987, and were hard to come by due to high demand and a hefty price tag.

Low on funding and unwilling to wait, the researchers at Hopkins decided to make their own PCR machine. Over the course of two days, they constructed this robot out of parts found around their lab and objects available at Radio Shack and hardware stores. The robot has a moving arm that transfers the DNA sample between two water baths of different temperatures. A programmable lab timer from another piece of lab equipment makes up the “brains” of the robot. A TV antenna rotator from Radio Shack moves the arm (a long wooden dowel) back and forth, and a solenoid from a dishwasher door lock lowers the arm into the bath.

To give the robot a bit of personality, the scientists added a styrofoam head, sunglasses, and a navy baseball cap with a gold star and gold braid detailing. One part of the object has been painted with a red “BV,” likely for “Bert Vogelstein.” All of these parts are assembled on a two-tiered wood frame.

Thanks to help from the robot, the researchers were able to determine the function of the p53 gene. Prior to their work, p53 was known to be linked to cancer, but its function was not understood. The Hopkins team’s research determined that p53 is a tumor suppressor gene, regulating cells whose DNA is da. Mutations in the gene destroy this regulatory function and result in cancer. The team published their results on April 14, 1989 in a Science article entitled “Chromosome 17 Deletions and p53 Gene Mutations in Colorectal Carcinomas.”

AbioCor Total Artificial Heart is the first electro-hydraulic heart implanted in a human.