In the fictional universe of George Lucas' Star Wars films, robots called droids (short for android) come in many shapes and serve many purposes. Two droids-R2-D2 and C-3PO-have won enormous popularity for their supporting roles in all six of the series. In the collections of the museum are costumes of R2-D2 and C-3PO from "Return of the Jedi," released in 1983 and the third film in the Star Wars series.

Designed from artwork by Ralph McQuarrie in 1975, R2-D2 looks more like a small blue-and-white garbage can than a human being. In the films, R2-D2 is the type of droid built to interface with computers and service starships-a kind of super technician suited for tasks well beyond human capability. By turns comic and courageous, this helpmate communicates with expressive squeals and head spins, lumbers on stubby legs, and repeatedly saves the lives of human masters .

Several R2-D2 units, specialized according to function and edited into a final composite, were used for making a single movie scene. Some units were controlled remotely. Others, like this one, were costume shells, in which actor Kenny Baker sat and manipulated the droid movements.

R2-D2's sidekick and character foil, also based on art by Ralph McQuarrie, is C-3PO. Termed a protocol droid in the films, C-3PO can speak six million languages and serves the diverse cultures of Lucas' imaginary galaxy as a robotic diplomat and translator. Where R2 is terse, 3PO is talkative. Where R2 is brave, 3PO is often tentative and sometimes downright cowardly. Where R2 looks like a machine, 3PO-in spite of the distinctive gold "skin" -more closely resembles a human in movements, vision, and intelligence

In each of the Star Wars films, actor Anthony Daniels wore the C-3PO costumes. Like the R2-D2 units, more than one C-3PO costume was used for each movie.

The Star Wars films are much more than pop entertainment. Since the first of the series was released in 1977, they have been so immensely popular that they have become cultural reference points for successive American generations. And like other popular works of science fiction, they play a powerful role in shaping our vision of the future.

Likewise, the droids are more than movie stars in these influential films. They are also indicators of the place of robots in the American experience. Conceived at a time when more robots inhabited the imaginative worlds of science fiction than the real world, R2-D2 and C-3PO represent the enduring dream of having robots as personal servants, to do things we will not or cannot do for ourselves. Today, real robots are more numerous. They mostly work on industrial production lines, but researchers are working to extend the use of robots for tasks not humanly possible. It is likely we will see more of them in the future--as aids for medicine and surgery, for military and security, and even for exploring, if not a galaxy far away, at least the far reaches of our own solar system. 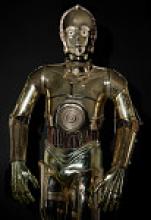 Loosely based upon the childhood of Maria Mitchell, America's first woman astronomer, here is story of a girl who yearns for adventure.