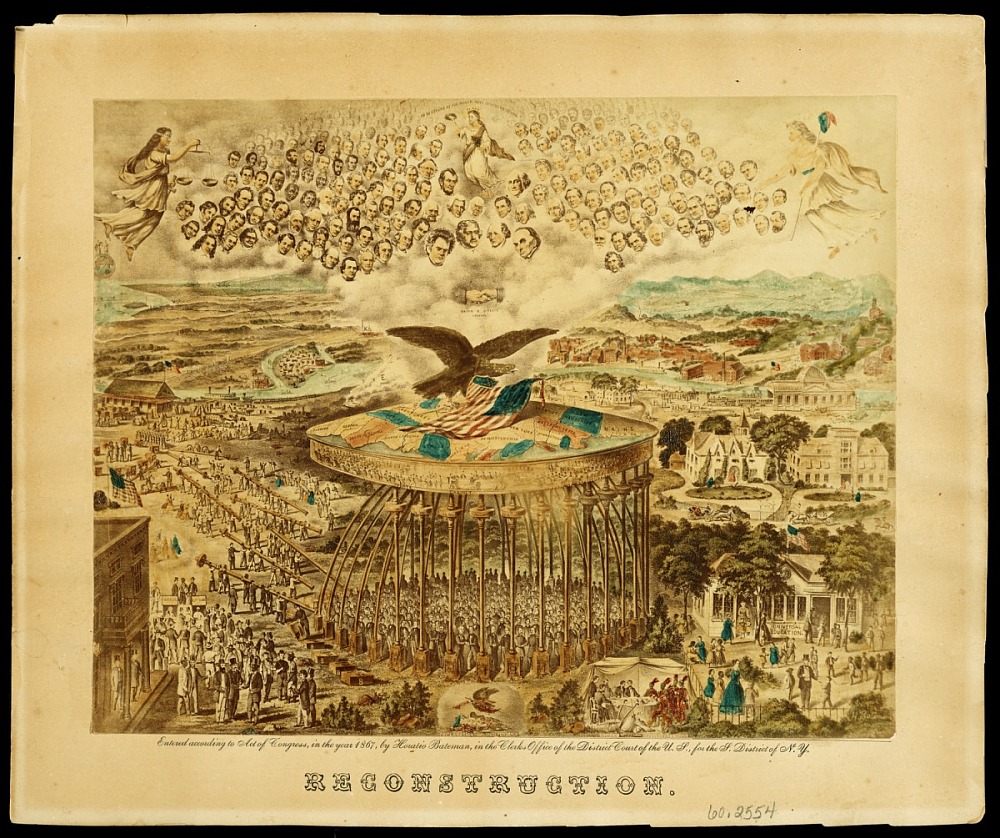 This allegorical print displays hopes for reconciliation through the federal program of Reconstruction. The nation and government are symbolized by an enormous canopy-like structure, upon which is emblazoned with a map of the United States. An eagle holding a crest and American flag sits atop the map. A frieze that encircles the structure’s dome displays depictions of the Senate, House of Representatives, Supreme Court, and Cabinet. Pillars representing each of the state governments support the dome. However, the pillars and bases symbolizing the Confederate states are in the process of being replaced, providing for the viewer a pictorial representation of the process of Reconstruction. Under the shelter of the canopy, the leaders of the Union and the Confederacy come to terms: Ulysses S. Grant shakes hands with Robert E. Lee and Horace Greely embraces Jefferson Davis. At the bottom of the illustration, a black and white baby sleep under an eagle holding a banner reading, “All men are born free and equal.” In the lower left, intermixed gathering of black and white voters gather near two plaques labeled “Universal Suffrage.” In the lower right, white officials meet with Native American chiefs in a tent to discuss terms of “Indian Reconstruction.” Nearby, black and white children play together in the yard of a school marked as “Universal Education.” Above the landscape of the print, the faces of various American statesmen and historical figures look down from a cloud upon Reconstruction. Near the center of this array of profiles, John C. Calhoun and Daniel Webster feature prominently. In the center, a robed figure of Jesus wearing a crown of peace is accompanied by the words, “Do to others as you would have others do to you.” In the upper right corners float the female personifications of Liberty and Justice. Below the faces, two disembodied hands are clasped, followed by the words, “Union & Liberty Forever.” Although idealistic, many of the elements depicted in this print would not become realities during Reconstruction: universal suffrage and education for all races would not come into practice until the 20th century, westward expansion would result in continuing bloodshed and further mar U.S. - Native Americans relations, and the country would continue to face deep regional sectionalism throughout the 19th century.