Silver Teapot made for Abigail Robinson of Newport, RI

Silver Teapot made for Abigail Robinson of Newport, RI

This silver teapot was made by Samuel Casey of Little Rest (later Kingston, R.I.), about 1750, for Abigail Robinson, probably about the time of her marriage to John Wanton of Newport, R.I., in 1752. Shaped like an inverted pear, the teapot has silver feet and a wooden finial. The wooden handle is a later replacement. The teapot came to the National Museum from descendents of the Wanton-Robinson family. In the Museum collection, such household items document the history of daily life, families, and patterns of consumption.

Teapots were among the fashionable items that fit many colonists' taste for stylish possessions in 18th-century British North America. Among the prosperous classes, growing numbers adopted the genteel practice of drinking afternoon tea in imitation of the English gentry. Some Americans imported ceramic tea services, while others patronized local silversmiths. Silver was intrinsically expensive, and it allowed engraved decoration and personalized initials, as on this teapot.

Although Abigail Robinson would change her name at marriage, her teapot expressed her identity with her family of origin. Born in 1732, she was a daughter of Deputy Governor William and Abigail (Gardiner) Robinson, and her family owned large estates in the Narragansett area. Robinson's initials are below the family coat-of-arms, a heraldic decoration that identified the American family as descended from Thomas Robinson, an official of "his Majesty's Court of Common Pleas" in London, England. Such coats of arms were an element of English society's commitment to social hierarchy, the division of the population into the few and elite on the one hand, the many and the common on the other. Silver and other items ornamented with coats of arms testify that immigrants to the New World brought with them some of the social distinctions of the Old World.

1: Why the Americas attracted Europeans, why they brought enslaved Africans to their colonies, and how Europeans struggled for control of North America and the Caribbean

2: How political, religious, and social institutions emerged in the English colonies

3: How the values and institutions of European economic life took root in the colonies, and how slavery reshaped European and African life in the America 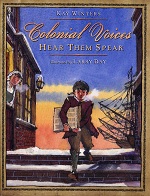 Different colonial Bostonians introduce themselves through Kay Winter's poems or free-verse vignettes that describe their work and their feelings about the current political situation on December 16, 1773. The poems are enhanced by historical notes and a glossary.