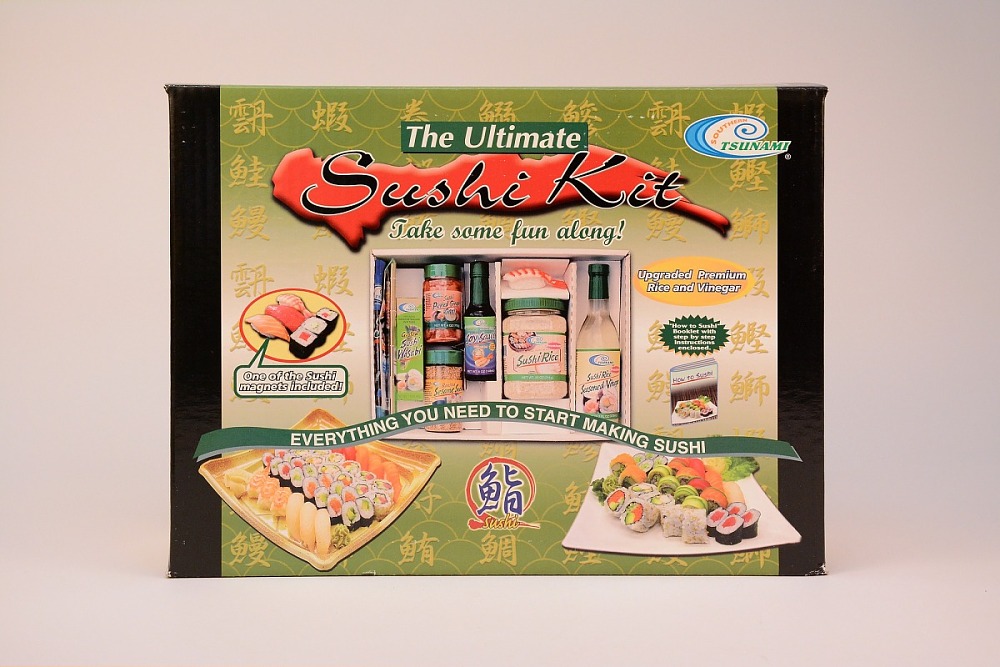 2001 edition sushi kit produced by the Advanced Fresh Concepts Corporation in California.
The lid advertises the kit as the "ultimate sushi kit," complete with "everything you need to start making sushi" displaying photographs of sushi, a How to Sushi Booklet, and lists the ingredients and materials contained within the kit: pickled ginger, sushi rice, wasabi, sesame seeds, soy sauce, and seasoned vinegar. There is a sushi magnet included in the kit. On the right side of the lid, there are pictures depicting the assembly of the ingredients of a sushi roll and rolling it. The photograph of the platter of sushi includes nigiri sushi and makizushi of salmon, tuna, avocado, etc. It has the Southern Tsunami logo on the upper right corner of the lid.In 1986, AFC Corporation was born with a mission to market fresh packaged sushi to supermarkets in America, a concept revolutionary at the time. This product reflects the popularization of sushi and AFC’s attempt to introduce sushi-making into the American household. The creation of this kit and the tagline, “Take some fun along!” also suggests sushi-making to be a special event set aside for occasions like parties and get-togethers with family and friends. The variety of sushi on the cover is limited to salmon, tuna, white fish and shrimp nigiri and California rolls, reflecting the tastes of the consumers and perhaps their accessibility to fresh ingredients. The variety and customization of sushi also appeals to a wide range of consumers including both vegetarians and non-vegetarians.

Learn more about the artifact!